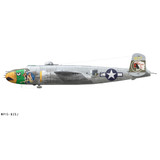 The 498th Bombardment Squadron trained under the Third Air Force in the southeast United States. They were deployed to the Pacific Theater of Operations (PTO) in June 1943, thereafter being assigned to the Fifth Air Force in the Southwest Pacific Area.

The 498th engaged in combat operations initially during the New Guinea Campaign, attacking enemy targets in New Guinea in support of General MacArthur's campaign, using B-25s for low-level strafing attacks. B-25s were modified with extra fuel tanks to increase range with extra .50 caliber machine guns installed in the noses of the aircraft. The bomber squadron engaged in combat over New Guinea, the Bismark Archipelago, Northern Solomon Islands, the Southern Philippines and Leyte. Also flew long-distance attacks over Southeastern China and Formosa before the Japanese Capitulation in August 1945.

Spruce up your room, man-cave, garage or toolbox with this vinyl decal paying tribute to the famed Air Apaches and the 345th Bomber Group! Comes with smaller vinyl decals that can be applied anywhere, an application tool, and instructions.