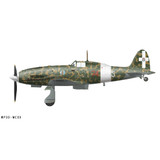 The Macchi C.202 Folgore (Italian "thunderbolt") was a World War II fighter aircraft built by Macchi Aeronautica and operated mainly by the Regia Aeronautica (RA; Royal (Italian) Air Force). Macchi aircraft designed by Mario Castoldi received the "C" letter in their model designation, hence the Folgore is referred to as the C.202 or MC.202. The C.202 was a development of the earlier C.200 Saetta, with an Italian-built version of the Daimler-Benz DB 601Aa engine and a redesigned, more streamlined fuselage. Considered to be one of the best wartime fighters to serve in large numbers with the Regia Aeronautica, the Folgore operated on all fronts in which Italy was involved.

The Folgore went into service with the Regia Aeronautica in July 1941 and immediately proved to be an effective and deadly dogfighter. The Australian ace Clive Caldwell, who fought a wide variety of German, Italian and Japanese fighters during 1941–45, later stated that the C.202 was "one of the best and most undervalued of fighters". The C.202 also had its defects: like its predecessor, the Macchi C.200, it could enter a dangerous spin. It was insufficiently armed, with just two machine guns that easily jammed. The radios were unreliable, forcing the pilots to communicate by waggling wings. The oxygen system was inefficient, causing up to 50/60 per cent of the pilots to break off missions, sometimes even causing fatal accidents.

Spruce up your room, man-cave, garage or toolbox with this vinyl decal paying tribute to the MC.202! Comes with smaller vinyl decals that can be applied anywhere, an application tool, and instructions.