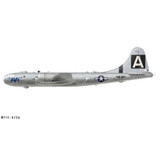 Boeing's B-29 Superfortress was the most sophisticated propeller-driven bomber of World War II and the first bomber to house its crew in pressurized compartments. Although designed to fight in the European theater, the B-29 found its niche on the other side of the globe. In the Pacific, B-29s delivered a variety of aerial weapons: conventional bombs, incendiary bombs, mines, and two nuclear weapons.

FIFI was acquired by the CAF in the early 1970s when a group of CAF members found her at the U.S. Navy Proving Ground at China Lake, California where she was being used as a missile target. The airplane  was rescued and restored and flew for over thirty years until 2006 when the chief pilot made the decision to ground her pending a complete power plant re-fit. What followed was an extensive four year restoration that included replacing all four engines with new custom built hybrid engines. FIFI returned to the sky in 2010 and since that time has traveled coast to coast attracting large crowds at every tour stop.

Sold on consignment from the CAF, with proceeds going to support the operation of this aircraft. Learn more about FIFI and the CAF AirPower History Tour.

Spruce up your room, man-cave, garage or toolbox with this vinyl decal paying tribute to the B-29 and Commemorative Air Force. Comes with smaller vinyl decals that can be applied anywhere, an application tool, and instructions.