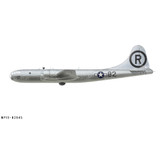 Boeing's B-29 Superfortress was the most sophisticated propeller-driven bomber of World War II and the first bomber to house its crew in pressurized compartments. Although designed to fight in the European theater, the B-29 found its niche on the other side of the globe. In the Pacific, B-29s delivered a variety of aerial weapons: conventional bombs, incendiary bombs, mines, and two nuclear weapons.

On August 6, 1945, this Martin-built B-29-45-MO dropped the first atomic weapon used in combat on Hiroshima, Japan. Three days later, Bockscar (on display at the U.S. Air Force Museum near Dayton, Ohio) dropped a second atomic bomb on Nagasaki, Japan. Enola Gay flew as the advance weather reconnaissance aircraft that day. A third B-29, The Great Artiste, flew as an observation aircraft on both missions.

Spruce up your room, man-cave, garage or toolbox with this vinyl decal paying tribute to this aircraft and the 393rd Bomber Group. Comes with smaller vinyl decals that can be applied anywhere, an application tool, and instructions.